Everyone in the hobby seems to already know how a Chord Mojo performs. I mean, let’s face it, a Mojo is a Mojo. It indeed is a great DAC for the entry level market and it is touted to be the best DAC in the range. There is a good reason of course, and that would be its capability to drive out excellent tonality out of even a lackluster DAP provided that you use the appropriate connections to Mojo. I had one for about 6 months and only decided to release it recently as I have grown some inclination towards desktop personal audio setups. I have gone to that point when I feel that a portable DAC paired to my DAP has become a bit cumbersome so I decided to enjoy what beauty there is in my DAP and ditch the Mojo (fare thee well, you have served me well).

However, just a week ago, the bedevilled big man of HEEP, Puds Edurise, decided to play some tricks on me by loaning me his Chord Hugo for a week, reasoning out that he will be out of the metro for the week anyway. And, in a very Puds-like fashion, this monster has instantly poisoned my ears with an auditory experience quite hard to forget. For that, I am compelled to stick a finger up to you, big man (the thumb though, not the middle). Yes, you just successfully destroyed my original plan of sticking to a DAP-CIEM travel buddy, you wench.

Yet, I still appreciate the guys who has been generous enough to give me access to your gears in the name of BRI. This has always been the fun part of BRI, trying new gears in spite of my shallow pocket.

So, Chord Hugo. A lot of people considers the Hugo as the pinnacle of mid-high end portable DACs and that’s for a good reason. Chord has created such a niche in the market where the brand has been the benchmark for most DACs in terms of comparison and the Hugo is no different.

As usual, Chord Hugo settled with no less in terms of build. The DAC is housed in a premium aluminum housing quite sturdy enough to withstand some acceptable pressure.

What’s so interesting with the Hugo is the wide range of connections available with the DAC. Apart from the standard 3.5mm terminals (it’s got 2 of them), it also includes an additional 6.3mm terminals in case you use headphones with such terminations. It also includes options for coaxial and optical terminals which should be sufficient for most sources. The best part though is the availability of USB terminals which can dish out 32-bit/384kHz signals. Another fancy addition is the RCA terminals should you wish to use it together with an amp in the chain. 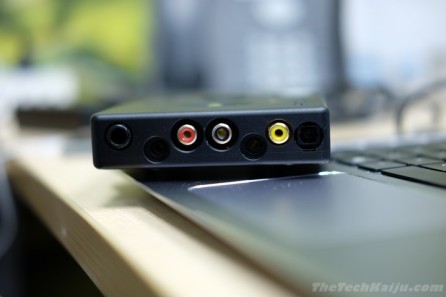 Of course, you won’t miss the colorful lights of the Mojo on top of the device which should indicate the sampling rate being executed by Hugo:

The Hugo has got to be the most equipped portable/transportable DAC in the market today given the options it can yield to consumers. Pretty versatile, huh? If only it had balanced output, it would have been perfect. But then again, I maybe asking for too much.

Of course all these are for naught if it won’t perform too well for its price. Thankfully, sound is of course the biggest of ace that Hugo has tucked in its sleeves. Given the wide sampling rate ranges, versatility has got to be the biggest strength of Hugo.

Let’s do a round of tests using Hugo with my Onkyo DP-X1 and Advance/AAW CIEM, shall we? Please take note that the tracks I used are 24bit uncompressed FLACs.

Humans Being (Van Halen, The Best Of Van Halen Volume 1)

The CIEM carries a reference sound, and one thing that I noticed using it with Hugo is the nice extension of highs playing the track. There was an obvious exhibition of 14khz-16khz range that sounded really distinct. Clean, sparkly but not harsh.

Personally, the best part of the track using the Hugo is the fading guitar solo as it remained crisp until the end.

The piano sounded halcyonic, very much like my impression of Billy Joel’s slow tracks. Only that this time, the distinction lies in every piano key hit by the master performer. This matches Billy Joel’s idyllic verses which soothes me easily as it normally would, only better. Punches of the drums are punchy, but what really made it more enjoyable is the smooth rhythm of the trumpets.

The guitars are utterly melodic from the beginning of the track, and it was given quite a justice by Hugo. As with the earlier tracks, each notes are crisp and soothing to listen to. Nothing was exaggerated in terms of peaks or dips, everything was done as naturally as how it is supposed to sound like.

The Hugo is a good travel companion given its size, however, if you are banking on something that you can easily slide in your pocket, that is something that you might want to forget with the Hugo. This is a transportable DAC/amp and would require you to have a bag if you are planning to bring it around unless you have a huge pocket.

My verdict for Hugo: I want one. Perhaps this is something that I will plan on getting this coming year. I know I have diverted my path and chose a desktop setup, and as much as I enjoy carrying just my DAP and my CIEM, having this will definitely change the way I listen to music, whether in a portable or desktop environment.