Thankfully for us audio enthusiasts, this is no longer quite a daunting task as custom in-ear monitors (CIEMs) are pretty much easily accessible and can be found in a lot of countries in the world. This makes our quest for our favored sound a lot easier to find.

A few months back I was already inclined to get an Empire Ears Athena as I thought I found it to be the closest to my auricular preference. I was preparing for it and even reached the point that I was ready to place an order until I was offered by a good friend a great deal (what can be greater than free, right?) for a then experimental CIEM offered by Advanced in collaboration with AAW, the M5.

Of course, that was a pretty quick decision, having been offered such, I immediately ditched the plan to get an Athena and opted to wait for the M5 to land on my porch. Was very glad that I was able to opt to use the Athena money for an SRS5100. I was one happy, jolly camper.

A month later, I will have to say that not only did the M5 satisfy my craving, it even exceeded my expectation. I even found it a heck lot better than the Athena.

Let’s get on with the review, shall we? 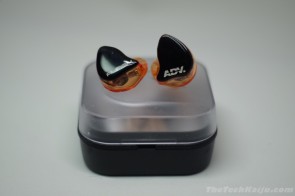 As with any other CIEMs in the market today, AAW used custom moulded shells made of resin to ensure comfort while using the M5. Inside the shells are 4 balanced armature drivers and a dynamic driver tuned by Advanced based on my preference, which was actually the fun part. When I sent my ear impressions, I was asked as to how I wanted it to be tuned by sending an FR reading of my preferred sound. As much as it was a bit tough, I particularly liked the fact that they did try to adhere to what I prescribed. They did not fail me on this aspect.

I went for an amber shell with a piano black faceplate for good measures as I wanted my very first CIEM to be simple and clean looking. To top it off, I was even offered to have my business’ name be imprinted on one of the plates, which actually kind of rocked for me.

Cable used was a 46″ Null Audio Vitesse Copper braided cable with a recessed 2-pin termination which pretty much is reminiscent of Advanced’s initial IEM offering, the M4, which means one wouldn’t worry much about accidental tugging of the wires. And as usual, the M5 comes with a 3-year warranty which pretty much tells how confident Advanced is with the quality of their products.

Little can be said of the build as it was as simple as durable, enough said. Of course, as with any other gears in our hobby, the most material matter will always be the sound.

In the case of M5, I would rather describe the sound as this is custom tuned based on my preference. As I prescribed it, I wanted to strike that good balance based on my preference: ample bass that has a good extension but not too overwhelming, mids that are slightly intimate and the highs being quite sparkly but tame enough not to be harsh. I kind of tried to fiddle with the 20khz range to ensure that the highs reaches the right peaks without getting beyond that to avoid any ear fatigue in my case. Thankfully, Advanced has such a great tuning engineer that really hits the right spot.

Let me do some impressions using some of my choice tracks. With the test I used the Sony PCMD100 setting the volume at 30%.

Ann Wilson’s vocals has the energetic stamina one would look for a female rock frontwoman, and deliver she did. This was especially pointed out by the M5 with the raspiness of her voice being highlighted while being harmonious with the distorted effects of the guitars. I also quite liked how the palm muting was cleanly heard in the guitars. Bass is very audible, tight and punchy but not the kind you will expect for EDM. I immensely enjoyed this track and will be willing to play it a few more times in a row.

The joyous piano strokes for this track was particularly highlighted using the M5 especially the low keys. True to Advanced’s tradition, clarity and detail has been quite immense with the M5. Even the claps and the brass are highly discernible with it, and Sara Bareilles’ vocals is never drowned in spite of the enchillada of instruments. I can even feel Sara Bareilles’ edgy vocals and how it constantly transitions from intense to gentle. M5 kind of gave me a different, more fun experience listening to this track.

The lightly distorted guitars in the intro is very transparent while the drums are quite tight and punchy. I personally liked James Taylor’s relaxed vocals, as it sounded very much loose and easy. Play on the cymbals is also fun, you can clearly hear it enough to properly accentuate the overall mood of the track without being overwhelming.

I was lucky enough to have a go with a couple of Empire Ears CIEMs to compare the M5 with, at least from memory. I am hoping that I still got it right:

Empire Ears Athena: Athena has lesser oomph on the low end but has a bit more sparkle compared to M5. Mids seems a bit recessed with the Athena in comparison to M5. Soundstage is also wider for M5.

For those who are thinking of getting a CIEM, the Advanced-AAW M5 is a viable option especially for those who wishes to venture into custom gears. Price is still undisclosed, but I will update the review once I get hold of it. One thing I am pretty sure of, if one wishes to go for something really good, the M5 should be it.