I had this coming. Fact is, this is long overdue as I have always wanted to have this in one of my Bus Ride Impressions, but was unable to given the onslaught of items to review over the holidays. Plus I have no one to borrow this from. And the wallet already underwent several cardiac arrests due to the holidays so I practically have no budget for one. And the Chief Finance Officer (a.k.a. wife) will no longer allow me to get another one.

So I had to sit this one out.

However, as the stars aligned, I got acquainted to a new enthusiast, Ryan, and was very eager in loaning his Limited Color Audio-Technica ATH-MSR7. I was simply delighted, apparently the fate has agreed to me in consummating the plan to release a BRI for the said can. And so here it is. 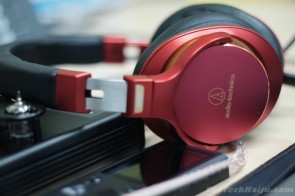 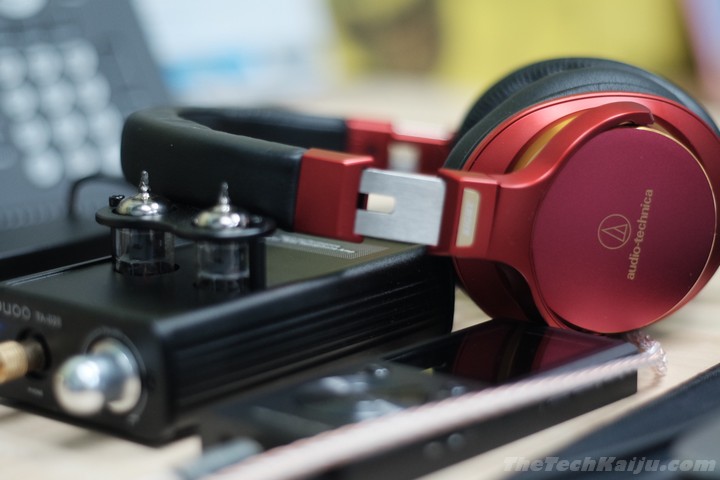 MSR7 is mostly built with acrylic material, albeit not the cheap type. Design and color tone seems fairly good, with the gold accent standing out quite well. However, what makes the can feel less premium is the creaking parts. I know that plastic parts may sometimes tend to be like that, but this creaks in every single move of any joint. That might be a deal breaker for some.

Headband and earpads are made of velour and seems comfy enough, except for the fact that for those who might be a little sweaty, life of these parts may be a little bit shorter than usual. One good thing about the MSR7 though is that it can be fitted with Brainwavz HM5 pads, which I think can yield better results. I will give it a go once I get a hold of one, however it is a relief to know that I have options in case the pads need replacement. The headband is another story as I haven’t come across of one which can be suitable replacement for the stock one in case it wears off.

Another thing that I noticed is the clamping force. I am not sure how long this has been with Ryan, but it seems fairly new to me. If this is so, this justifies the clamping force which made my head throb a little bit after about 30 minutes of use. I am hoping that over time this will loosen a bit until it gets comfy.

The MSR7 also brags about its detachable 3.5mm terminated cable on the left cup. This means you will have time for easier upgrades for the wire. The one loaned to me comes with a Tributaries cable, of which I believe has a better quality over the stock cable.

Overall, a decent build, but not what I expect for something worth $249.95 (price quoted from Amazon.com). Here’s the specs for those who are curious:

The can has been marketed as a reference sounding one and I will have to agree, there is some level of neutrality on the MSR7. It has a bit of flavor in it, but not something you will expect from the Sony MDR-1A. As I initially pour over it, what I noticed is it being analytical with a slight hint of brightness. Although I did try using it with a couple of amplifiers (Auglar GR-1 and Xduoo TA-02) and it yielded a bit different sound while using the can with each, which tells me that it is highly dependent on the source. I liked it better using TA-02 as it yielded a warmer sound, kind of toning down the brightness but not to the point of losing the sparkle.

Let’s go through it using a few choice tracks. Mind you, source that I used is Aune M1S paired with either the TA-02 and the GR-1:

Remedy (The Black Crowes, The Southern Harmony and Musical Companion)

One thing that stood out noticeably on the track is how little the bass you can get out of the MSR7. Sure, there are some, but not something you will get in abundance. Don’t get me wrong, it is not that I hate the seemingly lacking bass. It actually matches my preference, but it can use a bit of punch for those who has been accustomed to The Black Crowes tonality. High hats are clear and crisp, while the pianos sounded real clean. Chris Robinson’s vocals are quite transparent, but not too forward.

Without You (David Guetta, Nothing But The Beat)

Extension in the bass seems fair to good, but lacks the punch and the lushness as expected from the track. Vocals are similar to that of the previous track, with the second voice well layered from Usher’s voice. Synthesizers seems just a bit laid back with this track. Imaging seems quite good.

The lightly distorted guitar intro sounds crisp and somber, yet felt a lot alive. Sarah McLachlan’s vocals are as smooth as ever, with it being a bit forward using the MSR7. Sub bass sounded sufficient at least for this track. Layering is quite exquisite with the can.

True enough, the MSR7 is quite transparent and relies on the amp used to drive it to present the flavor one would want to get out of it. As the can seems quite easy enough to drive, one should not worry about lack of power for this can. However, the MSR7 can greatly benefit from an amp if you are looking for a bit of kick in the sound signature. I particularly liked the MSR7 paired with the TA-02.

The MSR7 is a good can, quite good for its price. I however would advice everyone to thread lightly if you want to get one. You will have to invest on an amp or source that has your preferred signature, otherwise you will have bear with what you will get out of it. I am not saying it is a bad can, it should be decent enough to satisfy your craving in case you wanted something adaptive to your source. However, personally I would probably get myself a Sony MDR-1A over this, although I won’t say no to one if one is given to me.