In today’s audio world, you will be bombarded by numerous digital audio players (DAPs) in the market that you will often be left in quandary as to which one to choose. It will always be a battle of which offers better sound and value out of your hard earned cash, but at the end of the day, it will always be up to one’s preference. You see, some people will put value in first, as it is natural for someone to look for something worth ripping their wallets for. Some others would not mind the price as long as they get to the sound they really want.

I would argue though as the plethora of options in the market changed the game for the past few years as there are some DAPs who emerged without really being too costly while providing such excellent performance that may, at some rare instances, match those higher tier sources. Of course, one will battle with the argument that they have landed with something that is based on their choice, and that they are happy with the choice.

Personally, I have found my gem relatively early with my purchase of the Onkyo DP-X1. Don’t get me wrong, I definitely like something better (Hifiman HM-901s, you ever elusive you) but my purchase of DP-X1 settled me into a value that practically meets most of my needs: neutralish sounding, works well as a transport, has a balanced output, decently fast Android UI and has a line level output. Although it is definitely not the best, it works quite great with my set up, be it portable or desktop, and is pretty much future proof for the next 2-3 years (naysayers, I know you will point out the poison of audio, but let me get my point across first) in case I wish to purchase another amplifer or DAC.

So while having myself so accustomed with the DP-X1 as my go to DAP, I fortunately got an offer to do a bit of a review for a few toys from Lyle Estipona who was so generous to loan me few of his stuff and among them is the new DAP offering from Sony, the NW-WM1A. Well not really new new, but this came out about tail of 2016 and has been in market for a relatively short period considering how long Sony keeps their products in the market.

Before I proceed any further, please allow me to remind you my dear readers to take the review with a handful of salt as I know there’s a lot of Sony fans out there. I am, at this juncture, already stating that I really don’t find the NW-WM1A a bad DAP, it is just going to be a very gritty review as I found a number of great and not-so-great things about it, so I would like to ask for open mind on the matter. The goal of the review is practically to find the perks and quirks of the product and allow better view for those planning to get one for themselves.

So, let’s get the ball rolling.

The Sony NW-WM1A is a tough SOAB (excuse me). It is. I had to exclaim it, but I really liked how the CNC machined housing felt while holding on to the DAP. It has that wonderful weight that allows you to feel the premium of the device yet is still light enough not to be cumbersome. Well, it is a bit weighty, but understand that kind of weight wherein you know that Sony diligently tried to limit the weight considering the components crammed inside the housing. It felt really tough that it seemingly can handle bumps well (but heck I wouldn’t want to, of course, lol). What I am worried a bit though is the rough back design; sure it allows excellent grip on the DAP but my worry is that it may wear over time, a thing I kind of hated because it will look quite ugly. But then again, this is just a small matter.

I also liked the way physical buttons are laid out on NW-WM1A.  It is pretty intuitive to me as it allows a good control while handling the WM1A. My gripe is, and this might be a little bit of an issue, is that Sony decided majority of the playback controls (play, pause, next, back, volume, lock) at the right side of the DAP. Should work great for lefties, but for right handed folks it is quite disconcerting to use the thumb to fiddle with the controls especially the play/pause, next and back buttons. Had I been given a choice, I would have placed these buttons at the left side of the DAP. Instead, Sony opted to have the hold control at the left side. Nothing else apart from that, which to me is a bit of a quirk. Perhaps they could have placed the play/pause, next and back buttons at the left side of the DAP. 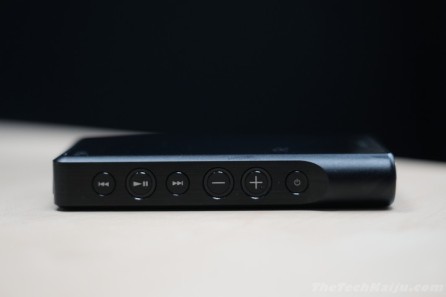 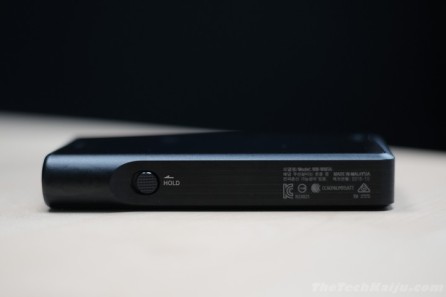 The top part of the DAP contains 2 jacks, one for the single ended termination (3.5mm) and the 4.4mm balanced output. While one would normally opt for the conventional single ended termination, most purists would opt for a balanced connection given how clean it can yield sound. However, Sony kind of plugged in a bit of a let down as they could have gone for a more popular 2.5mm or 3.5mm TRRS terminal. This means you will have to scout for a can, IEM or earbud that sports 4.4mm termination (most likely, from Sony) or get yours terminated with such. But then again, as this plug is not too common, it may be hard to find one.

The bottom part of the DAP carries the charging/data port for USB and the single Micro SD slot. Typical of Sony, they opted for the proprietary USB port, which means you will have to settle getting USB accessories from Sony alone. Also, Sony opted for a single slot for Micro SD, but then again given that the DAP carries an internal 128GB storage, this is practically a non-issue. You can also see a latch for lanyards at the left side of the bottom of the DAP, but I won’t really suggest it given the weight of NW-WM1A.

As for the UI, the way Sony laid out their UI seems to be quite intuitive enough. It is quite easy to navigate, although I felt that swiping through the screen has a slightly noticeable lag. For me it is really not an issue, but for some it may be.

Also, perhaps the biggest letdown with the NW-WM1A is when they decided to take out the line level output option. What on earth was Sony thinking? I know that the NW-WM1A seems to be capable of driving good power for IEMs and earbuds, but in the case of using hard to drive cans, I will have to resort to connecting it to a DAC, which renders the DAP nothing but a transport, a bit of an expensive one.

Overall I have a few questions on the build, but the NW-WM1A seems to be one tough cookie to break, even for the clumsy.

Sony NW-WM1A has quite a number of settings to fiddle with like DC Phase Linearizer, DSEE HX and Clear Audio, but I will opt to go for the default settings (all these are OFF) just so I will see how well the DAP will perform in its natural rawness. Also, in the absence of 4.4mm terminated IEMs, earbuds or cans, I will have to settle with the single ended termination.

For the sound test, I will be using two IEMs, the Advanced M4 and my CIEM, Advanced M5. I will also use the Meze 99 Classic just so we have a good variety of output device with different signatures.

With the M4, I had to jack the volume up by 10 as it seems to need a bit more push on the power. The track sounded brighter using the M4, which seems to have counteracted the typical darkish/warmish sound signature of Sony DAPs. Vocals have a good layer between Charlie Puth and Meghan Trainor, but sounded slightly recessed. Sub bass seems nicely extended, with the mid bass sounding a bit of an average tightness. Imaging seems to be fairly good, quite expected from a DAP with this price. M5 sounded a lot more rounded, with highs sounding a bit trimmed to a sparkle compared to M4. Bass seems to be pretty much the same with M4 with just a slight bump on the mid bass using M5. Using the 99 Classic, bass seems a bit more extended but I kind of missed the highs that I heard from both M4 and M5. Mids seems to be practically the same across the 3, with a bit of bump on the upper mids.

Just A Feeling (Maroon 5, Hands All Over)

Low ends are definitely more pronounced with 99 Classic, with the sub bass even more extended. Mids are relatively good, what with such good harmony on Adam Levine’s vocals and the backing vocals. The highs arelimited to just a short tss on the cymbals. Different case though for both M4 and M5 which has a bit more pronounced highs.

Imaging sounded fairly excellent for NW-WM1A, and I must say that I won’t settle for anything less given the price tag. Such build and weight would normally entail better components on the DAP, which seems to be met fairly by the NW-WM1A with decent colors.

The guitars are fairly clear with the NW-WM1A when paired with 99 Classic, but this is where the M4 excelled. The guitars is particularly enthralling with the M4, with the details definitely standing out with both M4 and M5. The blend of guitars, the voice of Menago and the impurities of the record is definitely enchanting.

One thing I am definite is how I immensely enjoyed the NW-WM1A with M4 and M5 largely due to the highs of the IEMs that seem to synergize excellently with NW-WM1A’s dark/warm nature. I may sound exaggerating, but it was hypnotic.

There are some naysayers with the NW-WM1A with some saying that Sony has reverted to being a money generating engine rather than an enthusiast’s option for a higher tier player. This, however, is where I beg to disagree. True, the sound signature and the details may not be something that should be very versatile, but I will have to say that given the right pairing, the NW-WM1A can definitely shine. In my assumption, it works well with brighter output devices or those that can carry that sparkle across to the NW-WM1A.

One would think, why would I buy something with that price if I will have to depend on the IEM or earbud or can that I should plug into it. The explanation is simple; all gear works in different synergy with other gear. While it may be true that you will have to go a bit of a way just to find the best pairing with the NW-WM1A, so does with a lot of other DAPs in the market. As for me, with what I heard from NW-WM1A as paired with the Advanced IEMs, I think it is worth getting it if it was for the sound alone. As for the other functionality like the button lay out and the dismissal of the line level output, it became a bit more unlikely for me to get one. So practically, as a standalone DAP, the NW-WM1A is a good contender against those in the same price range, but more likely I would probably opt for the Hifiman HM901S or NW-WM1A’s erstwhile cousin, the PCM-D100. As a transport though, I will have to say that there are other options in the market that I would definitely opt to.