Hello! So this is some sort of a sequel of the Rock Jaw Audio Alfa Genus V2 review wherein we will get to tackle how its younger sibling, the Clarito, does in the newbie market. Sure there are some cheaper options for the said IEM, but let’s see how it does in the market proliferated by those cheaper alternatives.

First off, I would like to thank Rock Jaw Audio for access to these IEMs. I will have to be honest, these two are not exactly my signature preference, but I am pretty sure they are going to be such a smash for our younger brothers in the hobby given their inherent qualities. Let’s get off with the review then.

Similar to Alfa Genus V2, I will have to say that Rock Jaw Audio did put some resource and effort in terms of build. Starting off with the shells, Rock Jaw Audio opted for an aluminum, cylindrically shaped shell that seems to allow enough air flow inside the shell given the dynamic drivers. As usual, it is ported on the side to allow such air flow. What’s different from the Alfa Genus V2 is that the Clarito sports what seems like a mix of acrylic and rubber as stress relief. For me it isn’t exactly the most durable design of a stress relief, but it should serve the job amply. 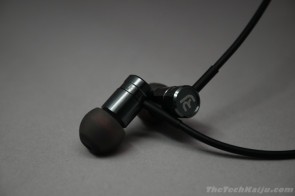 Overall it seems the build is not really a looker, but I think Rock Jaw Audio opted more on practicality by capitalizing on the durability of the IEM. If you are in the market for an efficient, affordable but capable IEM, Clarito should be one of those on the top of your list.

When I said earlier about how the Clarito will fit the taste of newer enthusiasts, I meant it has the typical quality usually hunted for by the newer personal audio lovers: bass. The Clarito has a lot of it, but the good thing is that unlike some of the bassy entry level IEMs I have tried, this one not only offers bass quantity but quality as well. While the sub bass has quite a good extension, the mid bass still offers good, tight punch that a lot will definitely enjoy. However, as a typical v-shaped tune would normally have, this one carries an ample quantity of treble; not piercing nor harsh, just right to allow you to enjoy the higher frequencies without being drowned by the lower frequencies as well. Mids is obviously recessed, but I will not say that it is too recessed similar to the Sennheiser Momentum IEM.

Let’s go ahead and try the Clarito with some tracks. I will be using the Sony PCM D100 to test the sound of the IEM.

While the roll of the drums may definitely sound tight and punchy, the guitars still definitely is clearly defined. I particularly liked how everything sounded like jambalaya in the ears but each instruments are clearly discernible. Keyboards are easily identifiable from the guitar while the drums are fancifully playing along. One thing I noticed though is that the Clarito doesn’t seem to offer the width ideal for the track, but then again asking for it may be a tad too much considering the price point of the Clarito.

The depth of the rumble of the bass strings can be strongly felt with the Clarito, while keeping the guitars still clear and transparent. I kind of felt now how Billy Corgan’s voice sound a bit recessed for my liking, but for a conventional user this may sound appealing. Clarity is still there, and at a good quality for that case.

Where Them Girls At (David Guetta, Nothing But The Beat)

I think this genre of music is where the Clarito excels quite well. I felt the brightness effectively executed, crystalline yet smooth while the bass is as punchy as it does normally. I can’t help but think that this maybe the music the designer has in mind when the Clarito was conceptualized. While the track is totally upbeat, it sounded very musical which should easily be enjoyed by most people.

I indulged good friend Vince Romero about his readings on the Clarito. Here’s what he said:

Pays to have a very capable comrade; he was able to somehow draw a few notes on the Clarito. While it has a bit uncontrolled sub bass, the mid bass seems to be a lot more stable leaning up to the mids.

Given the price point (US$32.04 from https://rockjawaudio.com) I think this is such a good contender for the entry level market. Yes, it may not sport the most flashy looking shells but then again for someone who wishes to be serious with the hobby, this is a very good starting point. I have seen a lot of newbie enthusiasts who are swayed by sweet promises as to how an IEM looks good as well as it sounds, but often times bassy entry level IEMs are either too dark or bleeds over to the mids. Great thing is the Clarito doesn’t mislead simply by looks and hearsays as this is one IEM that sounds great as a starter IEM without breaking your wallet. If you are one of those who are after such, this is a great option, I guarantee.