Aaaaannnnddd we’re down to the last IEM for the Trinity Audio week, and what finer way to cap it off but by doing the Bus Ride Impression on Trinity Audio’s premier, limited edition in-ear monitors, the Phantom Hunter?

At first I was dubious: why would TA’s supposed top of the line, limited edition IEM carry only 5 drivers while the Master 6 has, err, 6? Truly, is it not the case of which carries more drivers, but with the price difference, surely more drivers would be in order given the price premium? Yes, the shells of the Hunter is truly breathtaking, but what can the Hunter offer that the other TA IEMs can’t?

Trust me on this, color me biased, but upon trying the Hunter on, I was a BELIEVER! Sure there will be some shortages on some angles or maybe there still are things that it can’t offer, but at the very least to my taste, this must be one of the best that I have tried on a price-performance ratio. Heck, I will be willing to get another one knowing that there’s only a thousand made and I know for a fact that this is an IEM I will surely miss once it is gone.

So what got me so excited about the Hunter? Let me walk you through.

Much has been speculated with the Hunter, which I think is natural given TA’s plan to release only one thousand units. Sure this will be a yearly thing, but I am expecting the future iterations will be a lot different than the predecessors. In the case of this year’s Hunter, it generated so much talks that it was almost controversial.

But how is the Hunter when it came out? For one, as it just got release a few weeks back, I really wasn’t expecting much impressions for the Hunter, although upon receiving mine, I immediately felt that it was indeed worth what the fans paid for. Looking at the earpieces alone you can already feel it being one of a kind. The shell is made of titanium, something you won’t normally get from an IEM of this price. The Hunter has two color variants, the gunmetal and heat treated titanium, although I am totally digging my choice, the heat treated titanium. 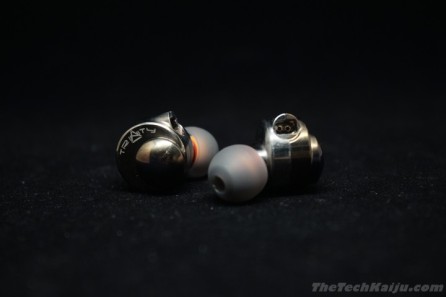 One really nice thing about the earpieces is that TA decided to change the female 2-pin jack. There has been some issues with the previous termination, but the one that comes with the Hunter and Master 6 definitely quashed any fears from how the previous terminations were. The jack has a slight groove on it to avoid mistakes when plugging the 2-pin male plug to the Hunter, which actually allows the plug to slide smoothly yet tightly to the earpiece. I kind of liked how snug it is, a far cry from how it was with the TA Phantom Sabre and the first version of the Vyrus.

The cable also seems to have improved a lot, with the new ones being more supple and a lot less strained when being plugged in the earpieces. at the 3.5mm plug you will still see the traditional stress relief (spring) which definitely should avoid cable issues. However, in any case that the cable breaks, it should not be an issue since it is detachable anyway.

TA added 3 cables in the package, two braided ones (with and without memory wires) and another one with mic. Should be pretty standard to me, although the website states that the package should come with two Litz 8-wire single crystal OFC cables, of which I have yet to receive. It was confirmed by TA though that this should really come with the package, so I am still waiting for those. 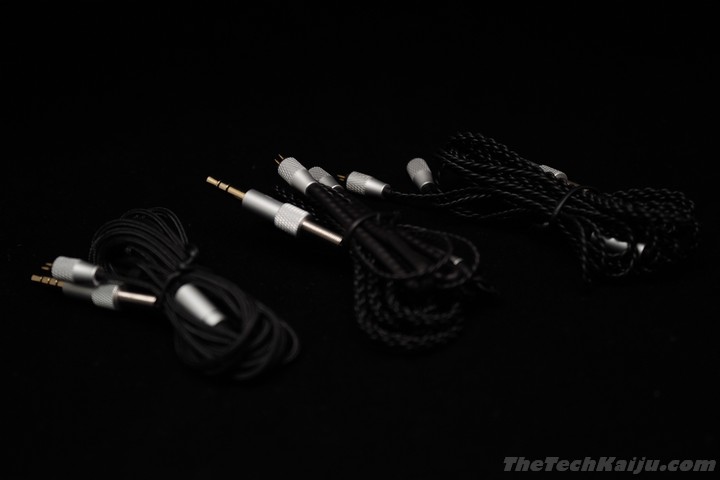 As with the other recent TA IEMs, the Hunter’s package includes the now-standard 12 pairs of tuning filters. I have spoken a lot about it for this week, so I will just leave you guys to dig the recent episodes of the BRI to check.

My caveat is that just like the Vyrus V2, Master, and Master 6, the Hunter still doesn’t have storage case. I would have understood the other IEMs to not carry one, but considering the premium of Hunter, TA could have at least come up with the design of a storage case which they could have included in the packaging. I agree that yes the price of the Hunter (450 GBP) is definitely very cheap considering what you get, but for something that is issued to be limited, I kind of find this a bit of a short coming. Also, packaging could also use a bit of an improvement; the IEM already gives the premium feel, but better packaging could have been really nice. But then again, there are just my wants, does not really affect the experience but could have been pretty nifty.

The rest of the packaging seems to be pretty standard too. 3.5mm-6.3mm adapter, shirt clip, and a huge array of ear tips are pretty much the same with the Master and Master 6. TA also took out the angled adapter plug, but this one I can seriously let slide. That sticker that shows the numbering of the Hunter is surely nice, I was fortunate to get the number that I wanted (sometimes, in life, you will really have to pull some strings, lol). 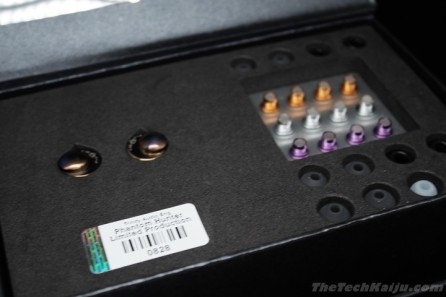 After going through 3 IEM reviews for TA, the packaging is not exactly as exciting as it was the first time, but is definitely bad. As I have mentioned before, the packaging alone is already worth more than what you paid for, so that is a Kudos for TA.

In my opinion TA took more time and greater deal when they worked on the Hunter. Personally, I can feel the significant difference of the sound of Hunter compared to either Master or Master 6. While I had a chance to allow people to test the Master 6 and Hunter and found the Master 6 appealing to some of them, there still is significantly more people clamoring for Hunter given the better imaging, natural sound and excellent soundstage it carries. Perhaps the deal on the signature will be entirely up to the tuning filter used, but it really is more beyond the signature; it is the quality where the Hunter excels, and fearlessly I would say that, in my perspective, the Hunter can definitely put up a good fight against a lot of IEMs more expensive than it. Heck, to be honest I find the Hunter a lot better than the SE846 from Shure.

To give you some idea, we will go through the Hunter using the Onkyo DP-X1 to see how well it performs.

Using the red tuning filters, I was given a treat to exhibit the prowess of the Hunter with the lower frequencies. The bass extends well, feeling the depth of sub-bass quite far in the chart. Approximately, I can still feel it humming well at around 20-30Hz range, which should give ample rumble while keeping the mid-bass tight and clean. Wonder’s voice is layered well against the backing vocals, giving quite a well balanced harmony without Wonder overpowering the backing vocals too much. Think about a more laid back attack but sounding a lot more natural than how I heard it with the Trinity Audio Master. Upper frequencies also has great tingle, with trumpets sounding airy and clean yet not harsh. While the highs doesn’t seem to extend as far as the sub-bass, the sparkle seems to be quite enough to allow you to hear most of the upper frequency details without really missing anything.

To be honest, the mastering of this album doesn’t seem to be as good as it was done in McLachlan’s albums. However, as what would normally be shaky piano lines with other IEMs sounded quite clean enough using the Hunter, albeit imperfect. I can still feel a bit of clarity issues, but I would probably have to attribute it to the track as the case is different using other piano tracks with the Hunter. Vocals sounded immaculate, not too powerful but standing out quite well to exploit McLachlan’s voice.

Perhaps this would exhibit Hunter’s prowess, that is, being able to present tracks with lots of instruments with such precision and imaging excellence. While the track is a jambalaya of instruments, everything seems to sound properly placed and layered; strings, piano, brass and drums are properly positioned. I kind of enjoyed the track so well, it was like being treated to an sonic wonder wherein you get to hear each frequencies with excellent precision. I can definitely hear the violins, violas and cellos at the front right, drums just a bit behind me on the right, trumpets front left, guitars on the left, and so on. It was indeed a sonic blowout for me, with each instruments given proper distance yet is still quite very cohesive. I would strongly suggest using the Hunter with orchestral tracks amongst many other genres it excels with.

I also got a chance to try the Hunter quite quickly with an Effect Audio Thor II with 2.5mm TRRS termination and was able to listen to it using Stone Temple Pilots’ Interstate Love Song and was blasted by such powerful clarity on the higher end. I won’t really suggest it to everyone as the tolerance varies between person to person but in my case, I instantly fell for it. May need to give it more listening time in the future.

In my opinion, the Hunter is a wonder that an enthusiast should not let pass without trying. While preference will still play a huge role whether you are to pick one up, I would be sure that for anyone who would like Hunter’s versatility and modular options should be pleased with how it is built and sounds. The price alone is such a huge bonus, what with a five-driver hybrid IEM being tagged as such (450 GBP), it should be worthy of a space in an audio enthusiast’s collections.

The Hunter easily met my expectation and exceeded it even, thankfully as it took a while for me to finally get one. And as much as it may have taken a while, I know for a fact that is well worth getting it. Too bad, it may take another year to get another one.