Straight From The Field: Beyond Innovations – Chord Poly Launch 11/09/17

We at The Tech Kaiju were given a privilege as we were invited to the launch of the latest Chord product, the Poly organized by Beyond Innovations, the official distributor of Chord in the country on November 9, 2017. People from media, audio groups and dealers gathered as no less then John Franks, the Founder and Chief Engineer of Chord walked the audience through their latest innovation at the event held at the Kuppa Roastery & Cafe.

John Franks and Robert Wong of Chord Business Development explained how the Poly plays a major role in the ever advancing technology of sound. They also got the chance to mingle with the crowd and answer the audiences’ inquiries about Chord and what it holds in the future. 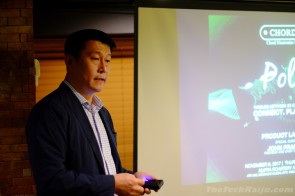 John Frank and Robert Wong discussing insights on what Poly has to offer.

The audiences were also given a chance to audition the Poly along with other brands carried by Beyond Innovations like Beyerdynamic and AKG. The crowd was also given a treat as freebies and discounts were offered on the event for Poly.