Ahhh, planars. Perhaps one of the best things that happened in personal audio. I myself am a fan, with my first being the Audeze LCD-2 (thankfully, not a lemon) introducing me to the tech which practically taught me that an enthusiast should have at least a pair in your arsenal. The speed it delivers coupling it with excellent presentation of the low frequencies should be a reason enough to have one.

After that, I have had a chance to have a couple more, the siblings Hifiman HE400S and HE400I, and while an electrostatic earspeakers has to be my favorite personal desktop audio gear, I still can’t rid myself of my love for planar magnetic cans. Maybe because planars are quite easier to manage (no need for a bias amp) and the potential to make it portable (I still can’t imagine myself using a planar magnetic cans and a Mass Kobo 404 in a bus ride) somehow takes its place in my heart.

Thankfully, my resident brand Advanced tickled my fancy when they decided to launch their first ever pair of cans, the Alpha, and boy it did make my Christmas come a bit early (a month earlier in fact). You see, Advanced seems to have no plans of halting, with their plans to release their first CIEM just within the horizons (brag: I already have one. Perks.), I am not surprised anymore of what else they plan to develop (DAPs? Amplifier for the Alpha? A spaceship?) in the near future. I will just have to take a bit of time from the episode today to laud them for doing a tremendous job of being creative and wreaking havoc on my wallet.

Anyway, let’s get back to business. For a brand who has been developing IEMs for a few years now, one might be anxious how they will do with their first headphone undertaking no matter how successful their line of IEMs is. Thankfully, one can trust Advanced’s proclivity to creativity to come up with something good, and with their signature house sound I think it is a pretty safe bet to invest on pretty much anything they come up with.

So, let’s go and tear the Alpha apart and see how it does on today’s episode.

Perhaps the best thing I like about Advanced apart from their house sound is their dedication to come up with such quality products, particularly with the build. Historically, I have come across with very little instances of warranty claims for Advanced with their IEMs, so you can pretty much assume that they will not drop the ball on the Alpha. Even more interesting is the fact of how they manage to keep the pricing down considering the build and the tuning they come up with their masterpieces.

As with Alpha, box starts off pretty neatly. It is one of those “of course the box has to be that nice, what with the price tag of $500” but ladies and gentlemen, I have seen several other cans with the same price tag and still can’t even scrounge a decent packaging; the Alpha thankfully managed to still consider the packaging seriously yet do an uncompromising work on the built of the cans. Besides, $500 is not exactly very expensive nowadays; if you manage to develop a planar magnetic can with that price, build and performance, let me know where I can sign up.

For the cans, Advanced seems to keep up with its proclivity with excellent design without costing too much, having designed the Alpha in a manner that it looks as if it costs more. They opted to use an aluminum band to ensure durability of the cans, with a leather headband to allow ample support which seems to be comfy for me. Hinges of the cups also seems fluid for me so no issues there. Perhaps the gripe that I have is the clamping force which seems to be a bit too tight upon first use. After a few uses, it seems to loosen up a bit, although I am hoping it to be more comfortable as I use it without it being too loose over time. 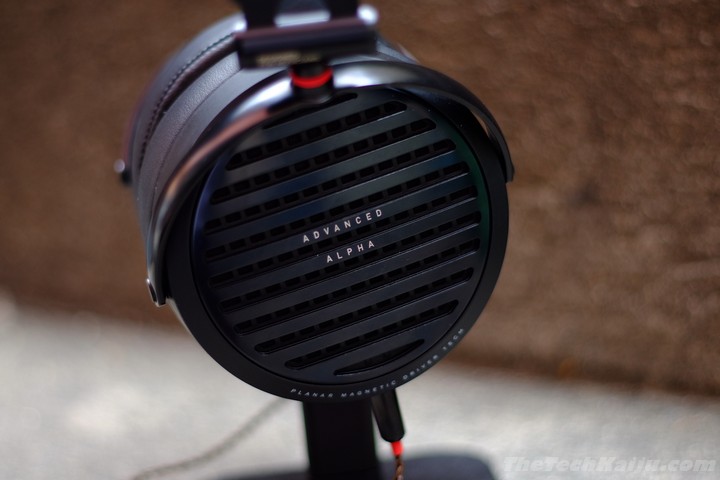 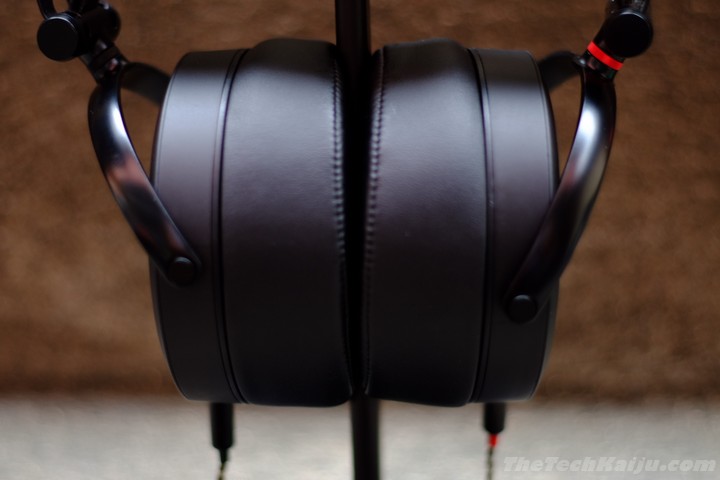 The pads are quite a delight, being quite soft and comfy and isn’t too warm in spite of the protein leather material. Even so, if you still feel the pads to be a bit uncomfy, you can opt to use the include shallow pads made of pleather and velour for that added comfort. One thing I noticed though is that bass was reduced using the shallow pads, so this may appeal those who are not into quite powerful bass typical of a planar magnetic can. There was a bit of added clarity using the shallow pads, but given the minor difference in comfort and sound, it will be entirely up to the user which works best.

The cans are terminated with two 2.5mm mono plugs which should allow ease if in case you wish to go for a balanced connection with the Alpha. I had a chance to use crystal cables terminated with Rhodium 2.5mm plugs and a 4-pin XLR plug powered by iFi Audio Pro iCan, and I must say that the sound was truly majestic. This should be a serious consideration in the future if I quest for a higher tier amplifier to power the Alpha.

Advanced decided to supply the box with an SPC cable terminated with a 3.5mm TRRS plug which is quite nice. It is supple enough and is light, therefore sticking to the plan of keeping the Alpha comfortable. Personally though, I would have opted if Advanced plans to release an aftermarket cable terminated with an XLR plug. As it is, it already is good, but for those who plans to go balanced, an XLR plug would be nifty. 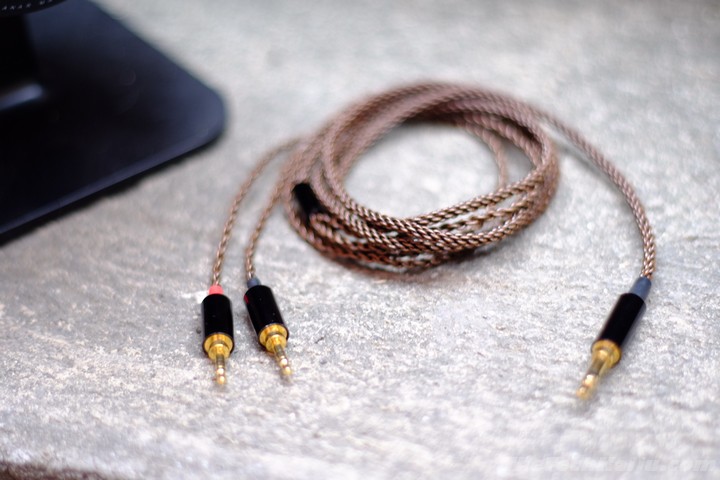 Apart from all these, Advanced also included a magnetic cable tie which is swell with the SPC cable. One thing I wonder though is why did they fail to include a 3.5mm-6.3mm adapter considering the Alpha being a tad hard to drive. One would expect it to be driven by a desktop amplifier, thus the 6.3mm adapter. It is quite easy to be had, just wondering that it would be a more natural course of action. Also, it would have been better if a pouch was included in the package, but maybe I am asking for too much on this. 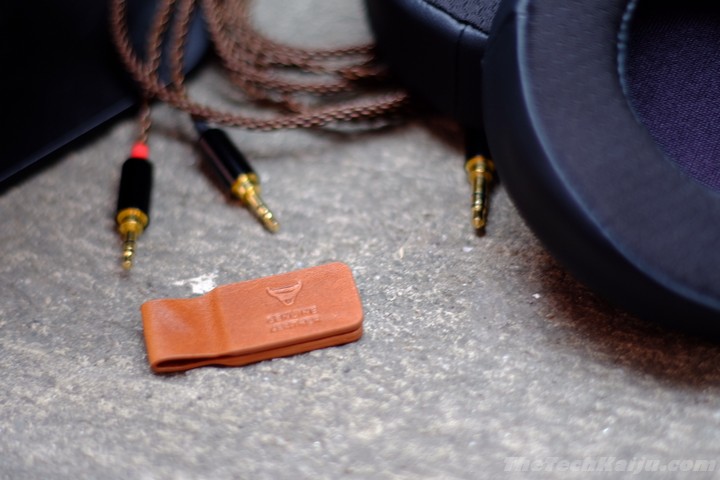 Overall, a pretty nifty packaging. I liked how the chest-type box matched the overall tone of the cans, and considering the price, I would say that the build alone makes the price a bargain.

At this point I have such high expectations with Advanced given their previous IEM releases. I understand that this is their first venture with a can, but given their tuning skills I am expecting no less than how the famed Model 3 and M4 did. Fair enough, I think the Alpha did fairly well for Advanced’s first headphone venture. I even heard a word about someone making a commentary that the Alpha did better than the first Ether, but of course that is just something I heard, and I am not really sure what factors made the Alpha better than the Ether (as I did not get the chance to talk to the said person).

As this is a planar magnetic headphones, I will be employing some help to drive it. Sure there are other planar magnetic cans in the market that can be easily driven even by a DAP, but as the Alpha demands quite some power, I know it has to be driven by a decent amplifier. While I am at it, might as well tinker with some of the iFi Audio stuff I acquired recently, so the Alpha will be driven by the following:

Here’s how the Alpha did based on my listening:

Never On The Day You Leave (John Mayer, The Search For Everything)

I liked the pianos off the Alpha, it allows that mellow yet crisp sound off the keys while allowing that slight hint of sparkle that will leave you wanting to listen more. Vocals doesn’t seem recessed, fact is, I think it is just spot on where it is supposed to be, feeling a level with your ears and right in front of you. The soft hits on the cymbals is properly placed behind. Thing is, everything seems properly placed, sounding quite natural with superb soundstage depth and width that allows such pleasurable experience with the track.

Water Under The Bridge (Adele, 25)

The track sounded a bit edgy with the Alpha, with each frequency seemingly presented with such tact that you will feel that the cans are trying to emphasize almost everything you can get out of the track. Percussions sounded spot on, Adele’s voice, not being drowned with the accompaniments and each instruments sounding distinct. I am not exactly a fan of Adele, but I enjoyed this track immensely, making me want to listen on so I gave it a go for the succeeding tracks. Thankfully enough, I enjoyed the next two tracks I listened to.

I just had to try this track with the Alpha. Was looking to see how natural and honest the Alpha can get and true enough, while there might be better, much expensive options, the Alpha was able to execute the track with such honesty; the all piano track sounded very dramatic as heard from the Alpha, with each key stroke sounding very emotional and dramatic. I can just feel the intense sadness of the track which gave me goosebumps throughout as I listened to it.

Looking at the perspective of whether the Alpha can pit up against most planar magnetic cans in the market, I will say that Advanced did a fine job ensuring that their first outing would indeed land with an impact. It looks good, and even sounds better compared to most of its competitors in the market at the same price range. While it is true that you will have to invest on the source to make it sing to its fullest, it still is such a steal considering its price to performance ratio.

Personally, this is one planar magnetic headphone you would want to keep in your arsenal. Regardless if you already own much more expensive ones, the Alpha should have a good spot in your armory of cans because hey, you can’t get something as efficient for its price, be it because of build or the sound. That alone for me is a very convincing reason when getting one.