I am quite a lucky guy. I know I haven’t written anything for the past several weeks due to a very toxic environment in the office (work really has the knack of rearing its ugly head and dumping in loads of paperwork to be completed in the most opportune time) so I kind of passed writing anything. I actually have a number of materials to write about; got that spring-loaded box of Indonesian earbuds to write about, plus a few DACs that I have sitting by my desk and a couple more cans that still is in pending status and yet I haven’t mustered the time to write about those. I loved writing, but work has to take precedence as it brings some food in the table (or gears on my desk).

However, a couple of weeks back, I chanced upon Lillian who inboxed me about an opportunity to write a review for Shozy/AAW Hibiki Mk.2. At first, I didn’t throw as much interest as what usually pikes my appetite but had to do a double take: Hibiki Mk.2? I was not even aware that Shozy and AAW already came up with an iteration of their successful initial offering of the famed budget IEM. That fact alone drew my attention and after several hours chatting with Lillian, we finally agreed to have one sent over for a review (in fact it also came with a Tin Audio T2, but that I will save for my next review).

I only had a brief chance to listen to the first version, and boy I admit to regretting the fact that I did. I should have taken more time listening to it. Now, given the arrival of the Mk.2 version, I feel compelled to grab one for myself and see how the new version fares against the initial one.

It took a while to get to me (I think it was a couple of weeks) but boy it was worth it. Mind, the Hibiki Mk.2 isn’t the ones you will pit against the likes of the Campfire Comet nor the Audiotechnica IM02, but given its price and how it matches against other IEMs in the same price range, I will bet that this is something that a lot of folks will love. Fair warning though, I will not try to dissuade people from keeping their current preference, but I would strongly recommend enthusiasts to give the Hibiki Mk.2 a chance. It is, after all, an iteration (improvement?) from the famed original Hibiki.

Let’s go ahead and see how this works. 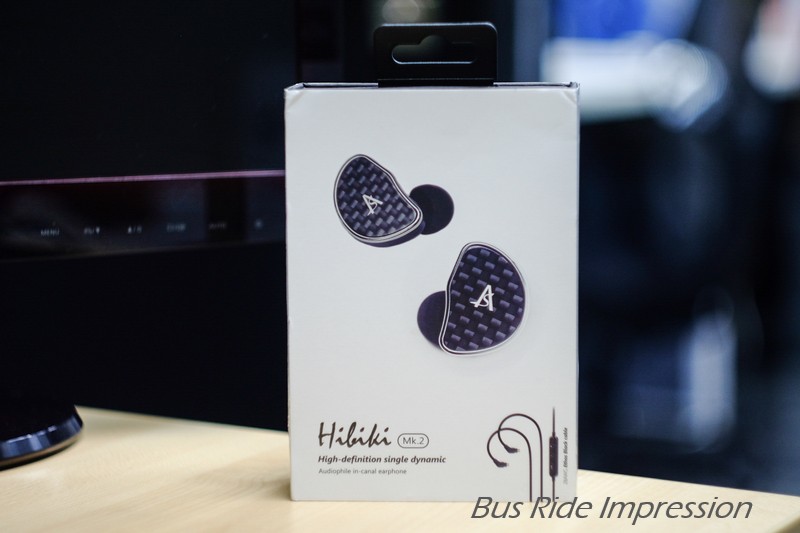 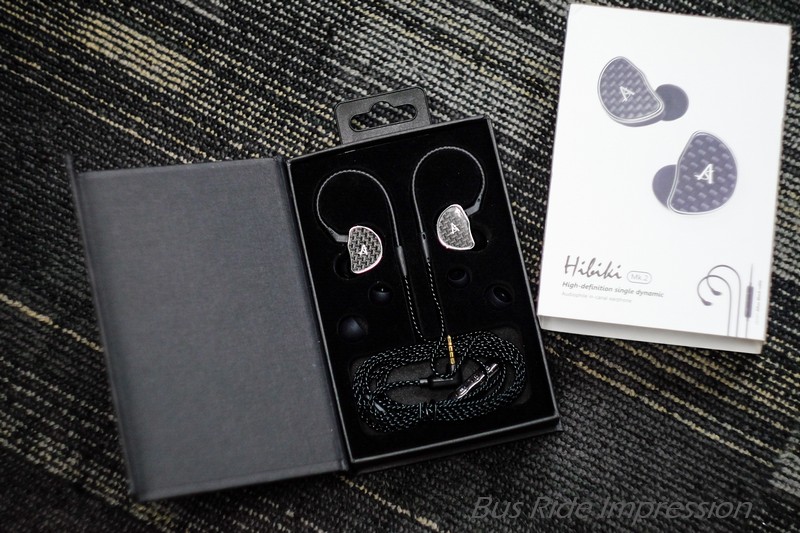 Packaging seems to be decent for the Hibiki Mk.2, with a white cardboard sleeve encasing a black box with magnetic flaps that keep the contents secure. Upon opening the box, you will be revealed with the IEM carefully fitted in a molded inner casing, which I think is really thoughtful of Shozy and AAW. The packaging practically screams of efficiency and practicality without compromising the elegant feel of the unboxing experience. 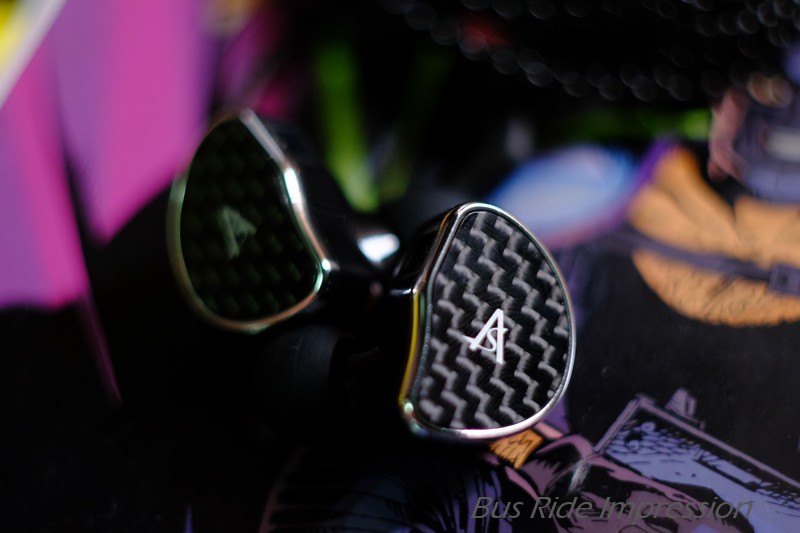 Shozy and AAW might have thought that they already got something good going with the first version of the Hibiki that they decided to keep the shell design. They kept the same, carbon fiber look with a glossy finish which seems to have appealed to their fans in the past. I don’t blame them, as it does look lovely especially when worn, but what I wonder about is the reason behind keeping the same plasticky material used in the inner part of the shell. Sure, it doesn’t feel cheap to me, the fact is, it carries quite some fancy considering its price, but had Shozy and AAW decided to go for a more premium material, it would probably rake in even more sales. I am not complaining though, perhaps it was Shozy’s or AAW’s tactic to keep the price down, after all, it is not as if it is bad. Perhaps it is just that inner me ranting about what I want. 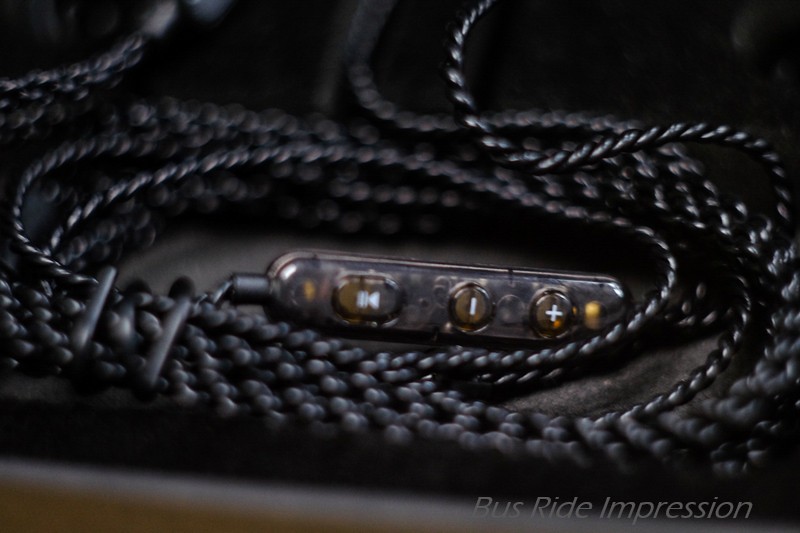 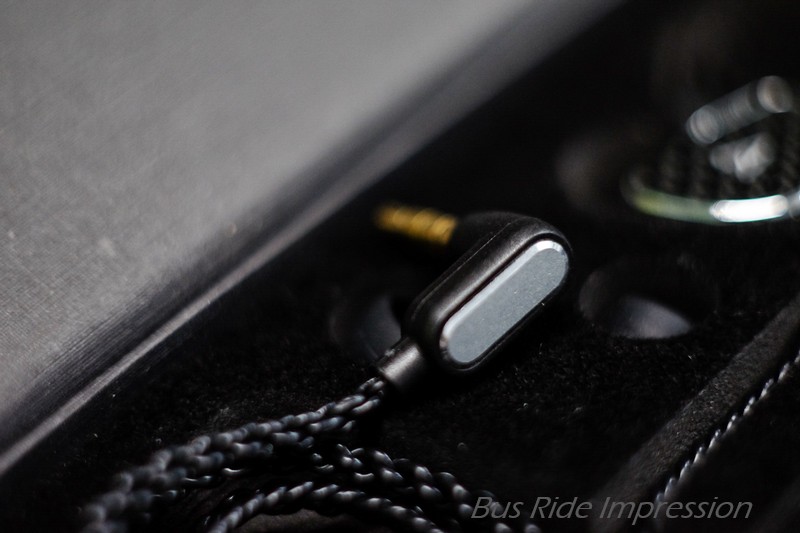 Honestly, I personally think that I would have been perfectly happy with the Hibiki Mk.2 coming with a cable with no mic nor controls on it, but Shozy/AAW did an excellent job by adding these features, and they did it with such a flare. The controls were actually effective when I tried it with my mobile; all buttons functioning as presented in the enclosed user manual: volume control, call control, play control, everything seems to work pretty well. Even the mic was functioning properly; I gave it a go and it worked pretty well, quite loud enough for the call to be comfortable even in a bit noise filled environment. The best part of the cable is that it is detachable, so I was able to fit the earpieces with spare cables (wait for me to go through my sound test of the Hibiki Mk.2 using my 2.5mm TRRS terminated silver cable). All these for under $60.

With the sound test, I will opt for my Centrance HiFi-M8 paired with the Cayin N3 as I feel that it carries the cleanest sound out of my portable sources. Was thinking of the Hifiman HM-901S but I will probably take the Hibiki Mk.2 for a spin with the said source later; I would try the IEM with a dead quiet source for now. Will also be trying the Hibiki Mk.2 with a couple of my balanced cables (copper and silver) terminated with 2.5mm TRRS plugs to see how much it will change upon using a balanced connection.

In a nutshell, I think the Hibiki Mk.2 benefits with a clean source. I know, pretty much all would benefit with one, but the Hibiki responded so well with the HiFi-M8 that I think it sounded much better compared to when I connect the ATH IM70 to the same source, albeit the different tonality. Initially, while I feel it be a bit V-shaped, I think the mid-range isn’t as dipped as other IEMs with similar tonality, and even feels as if it is just slightly recessed enough to be called v-shaped. Overall, I like the presence of a deeper sub-bass which I think is a bit short for the first version of the Hibiki. I also felt the upper mid-range to be a little less harsh compared to the first version so this might be a lot safer to use for those who have a lower tolerance to such.

Here’s what I think using the Hibiki Mk.2 with my choice tracks:

As mentioned earlier, the reaches of the lower frequencies for the Hibiki Mk.2 feels significantly better than its predecessor. I can feel the rumble way lot better while maintaining that clean, tight feel which seems to be something Shozy was apprehensive about when they designed the initial version. Trebles are crisp, I particularly liked how nice the cymbal splashes sound like.

Low Rider (War, Why Can’t We Be Friends?)

Using the HiFi-M8, I think the Hibiki Mk.2 did justice to the track in terms of imaging. I liked how natural it sounded in terms of how it layered the instruments, something that I don’t often get out of the track using other IEMs in the same price range. Similar to the first test track, the bass was tight and clean, mids are well pronounced, while trebles are crisp. I also liked how resolving Hibiki Mk.2 is; at this point, I am confident in saying that this should be a go-to beater when you are looking for one.

As much as this is a bit of a change compared to the initial test tracks, I still gave the Hibiki Mk.2 a go with the track only to test how well it will sound using a relatively slower track. Fair enough, I liked how well it played the pianos off the intro of the track. As the guitar and voice comes in, I was quite comfortable as to how the IEM sounded with the track. The bass sounded deep and steady, imaging is as superb as the last track, and the entire thing sounded as musical as I wanted it to be.

I also took a stab on using the Hibiki Mk.2 with my silver and copper balanced cable with the HiFi-M8 and with my Astell & Kern AK100+Centrance Glove A1 combo, and fair enough, I got the improvement I was expecting out of a balanced termination. Blacker background as usual, but I think the Hibiki Mk.2 sounded way better using the HiFi-M8 when in balanced mode in the sense that the tracks sounded livelier and more aggressive. If not being used with my phone, I am most definitely going to use the silver cable with it when plugged into the HiFi-M8 for a sparklier sound.

Now this section is something I will add the first time as I normally just incorporate my other observations on the downside through the review. I think it is just prudent, as this would allow me to present the cons of the review item for those who are looking into what are the adverse factors to be kept in mind before jumping the gun.

For the Hibiki Mk.2, I won’t say there really is much as I find it to be a very enjoyable IEM to use be it with a DAP or your mobile. Perhaps the thing I can say about it is that for those who has a pretty sensitive tolerance with bright IEMs, this may not exactly suit you. Not that it is virtually unusable for such folks, but it might take a bit of getting used to the Hibiki Mk.2 as it has a bit of an emphasized high end with sufficient extensions. I personally enjoyed it as I liked my IEMs that way, but for few enthusiasts who may have a certain level of tolerance, this may not be the best you can get within the price point.

Also, the packaging doesn’t come with a storage case, be it a pouch or a hard shell case. It isn’t something new as the first version also doesn’t carry one, so I would suggest that you get one to protect this gem.

Overall, this is one nifty IEM. I personally recommend it to anyone who wishes for great details from an IEM for such a low price. I would even dare say that the Hibiki Mk.2 deserves even more loving in spite of it popularity: for me this is the kind of IEM people should be gunning for in a budget IEM.

***special thanks to Lillian of Linsoul Tech for allowing the review unit. For orders you may reach out to her through the links below: