Budget in-ear monitors are a dime a dozen. In the current hobby scene, you can see how they proliferate as new players come in left and right. Over the past couple of years, a horde of entry level IEMs have broken through the mainstream market; it’s is not exactly surprising as the appeal of budget level IEM’s with sound quality good enough to be considered “Hi-Fi” has been tickling the fancy of hobbyist since time immemorial. Decent sound can now be had without breaking your piggy bank. Indeed, some of these offerings are good enough to satiate the craving for a really decent audio setup – perhaps enough to be considered a poor man’s alternative to the likes of HUM and Campfire Audio.

For every handful of budget IEMs that caters to each sound flavor, there’s really only a few that stand out and make noise because of their sound quality. I’m not saying that my opinion or preference about what gear stands out is better than others; we merely just have to give credit to where it’s due –IEM’s with exquisite and unique tonalities that live up to the attention they make.

Today, we’re tackling what seems to be a good option for a budget IEM – the TRN V80. It doesn’t carry the same pizzazz like other more popular budget options, but the TRN V80 might just be one of those hidden gems that deserve some loving.

Having subjected it to at least a hundred hours of burn in, how did it fair? Does it have what it takes to stand out in rapidly growing entry-level market? How well is the hybrid 4-driver design tuned? Is it worth the $40 dollar investment, or is it just another back of gimmicks? Let’s find out in today’s Bus Ride Impression.

The packaging looks decent for its price. I’d say it could have been better but packaging shouldn’t be the main consideration in a budget IEM, if at all. The box seems to be capable of standing a decent amount of pressure. The molding inside the box is a nice touch as it snugly houses the earpieces.

I particularly like the shell design despite the conservative and simple design. It won’t bag bragging rights for aesthetics. The material used however has an air of durability – the metal shells feel hard enough and it inspires confidence even with clumsy use. I’m confident enough to toss the TRN V80 in my bag and not worry about it breaking.

The stock cable on the other hand wasn’t impressive at all. Generic is an understatement – you can see this exact style of cable use by tons of other budget IEM’s in the market. It would have been better if TRN used a better plug and splitter to go with the nice build of the shell. It may withstand some heavy usage but I won’t be surprised if it breaks sooner than expected.

Luckily enough, the cables are of the 2-pin detachable variety. The cable could be replaced should it break, or if you want just an upgrade. The pins are the standard 0.78mm diameter – meaning that aftermarket options would be widely available for the V80 – you could even go wireless with aftermarket Bluetooth cables. 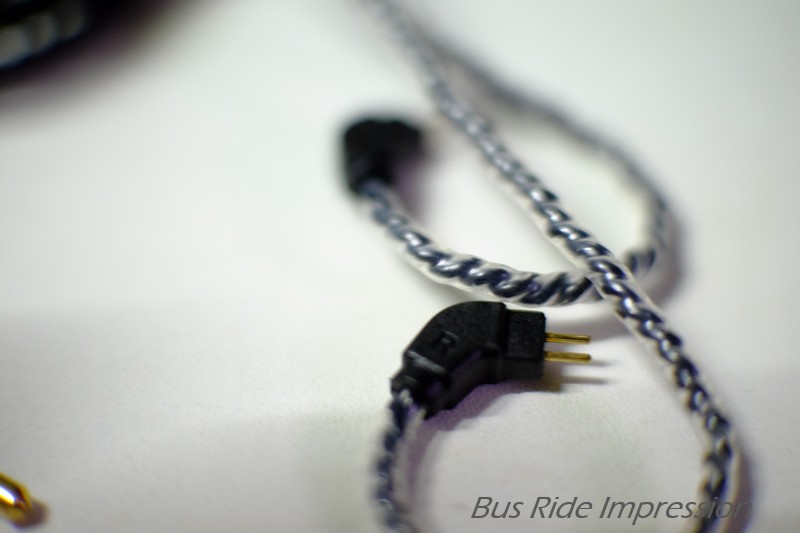 Overall, I’d say the V80 has a decent build. It’s not exactly flashy or over the top, but it’s reasonable given the price. You can clearly see where they had to cut costs to maintain the price point, these are within reason.

The typical options available in this price point are usually bassy. It’s nice to see newer IEM’s coming out and experimenting with different tonal configurations. I think this applies to the V80 pretty well. While I can hear it carrying the usual v-shaped sound signature, the V80 sports treble with a bit more sparkle and bass with a lower impact compared to the usual fare. Sure, it still has a solid, tight punch in the mid bass region but it doesn’t overwhelm the same way like the Geek Wold GK3 does.

Out of the box, the higher frequencies are a bit on the bright side so I decided to throw it in for at least 100 hours of burn-in. Hopefully, the process should eliminate some of the veiling and perhaps, if lucky enough, also tame down the highs a little to decent, tolerable levels.

For this sound test, I’ll be using the Centrance Hifi-M8/Cayin N3 combo as source. I will also have a go with the V80 using the Hifiman HM-901S and the Sony NW-A35.

Guitars would be the best aspect of this track when played with the V80 via the Hifi-M8. The raunchiness was distinct without overwhelming the keys and vocals. The voice does feel a bit recessed. Mid-bass is also very conspicuous while the sub-bass has a nice rumble to it – done with finesse and not overwhelming. The highs still are still sparkly tending towards bright but it does seem to have toned down a little. The imaging on the V80 through HiFi-M8 was pretty good.

Vocals sounded a bit more forward when played through the HM-901S. I suppose the more conservative instrumentation on the track played a role in that, as well as the HM-901S’ inherent tonality. Perhaps the biggest difference would be how harmonious the sound was with paired with the HM901S compared to the V80/HiFi-M8 pair – the tones it emanated were more musical. The HM901S allowed the mids to be more forward.

Gonna Get Over You (Sara Bareilles, Kaleidoscope Heart)

It was pretty obvious just form the first few lines what the A35 exploited in the V80: bass. It kinda felt that the bass was brought way up and forward, leaving the mids a bit more recessed compared to how it was on the HiFi-M8. It still does sound decently clean, although I’m not a big fan of its bassy tonality. It still sounded fun, but it’s not really my cup of tea.

While I had fun listening to the V80 given its ability to adapt to the source it’s plugged in, the overall tonality didn’t really work too well for me. Sure, signature preference depends entire on the end use, but I think the signature doesn’t really offer anything unique compared to the lot of budget IEMs available in the market right now.

The 2-pin jack could also use a bit more improvement. It gave me the feeling that constant unplugging would wear it out quicker than lots of other IEM’s in the same price point. The supplied cable seems like it was designed for a recessed jack – TRN could have gone all the way and integrated that in the shell design for the V80. I’ve seen folks lose and earpiece of this kind of issue, and I’m hoping this won’t be the case for the V80.

Overall, the TRN V80 has the makings of a great budget IEM, what with its capability to yield excellent sound if paired right. I guess there goes my concern too; while it did sound excellent with the HM901-S and somehow with HiFi-M8, I did find the pairing with the A35 a bit too bass-heavy. This being said, the V80 is quite too dependent to the source and might be an issue if it doesn’t synergize well with what you have. But if it does pair well with your current source, then I am pretty sure that you will have a blast listening to it.

***Special thanks again to our benefactor Lillian for the review unit. TRN V80 may be had from the following links: