So KZ came out with a slew of new IEMs apparently to keep their fans peeled on what they have to offer next. Not really a very new strategy for KZ as of late; just keep those IEMs coming and let the fans decide which ones they will get to replace their older ones. Fortunately for KZ fans, the brand seems to be relentless.

Good thing too that KZ seems to have improved with their recent releases (I think I mentioned this in my review for the KZ ZSA how I disliked the ZS5 and ZS6). Yes, KZ seems to be keen on keeping their bassy or V-shaped house sound, but at the very least they are doing a far better job than before. May it be the case that KZ’s offers are a tad too bassy or warm for me, but at the very least the ones that I tried lately doesn’t have that funky, somewhat unnatural sound from the mentioned models.

So after taking on the ZSA, I will be munching through the AS10, to see for myself if KZ does retain its status as the king of budget-fi gears on today’s Bus Ride Impression.

I was a bit surprised that, unlike the ZSA, KZ used an acrylic material for the AS10 especially considering the price difference between the two (roughly $20 vs. $50). While I have nothing against acrylic, it just felt that using the same metallic material as the one on ZSA would have offered a bit more assurance to the user in terms of durability. My guess is that KZ did so for aesthetic purposes which, to be honest, kind of worked for AS10. While I did like the kind of flair the ZSA has with its minute shell, the clear acrylic shell (plate perhaps?) allows you to see some of the circuitry while wearing the IEM. This, I think, might appeal to some enthusiasts. My only worry and I hope I am wrong, is that it might be the kind of material that easily breaks even on small pressure or impact. While protecting your gear lies entirely up to you, it would still be a relief had KZ use a far more durable material than this. 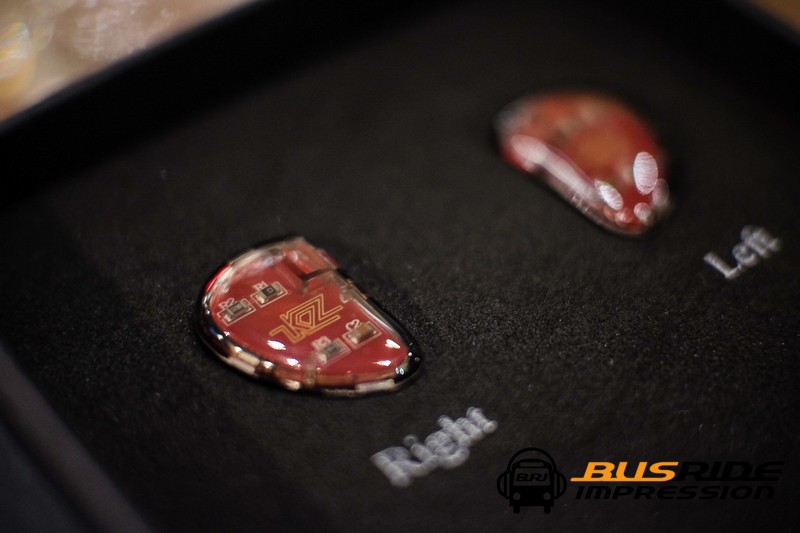 The 2-pin jack on the earpieces seems to be measured at .78mm, but I had a bit of reservation as it felt like the kind that might easily loosen over time. There felt like a lock when you have pushed the 2-pin termination to the earpieces, but by the looks of it, I will have to be honest in saying that I am not 100% confident. I think the ZSA wins in this aspect. 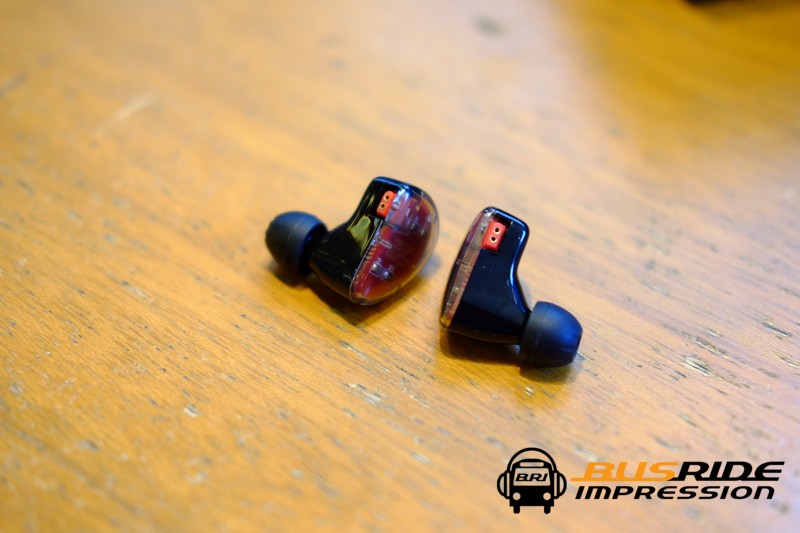 The included cable in the packaging is pretty much the same as the one with the ZSA. By usual standards of KZ, this indeed is far better, although if I were to use this as my daily, I would probably invest in a better cable. I would probably even invest on an SPC cable to ease up on the heavy low end and body of AS10’s sound (I humored myself and used a 2.5mm TRRS terminated Nocturnal Audio Calyx, and boy was I amused. Will tell about it a bit later.).

Along with the cable and the earpieces comes a set of silicone ear tips of varying sizes and a copy each of the instruction manual and the warranty card. KZ has not always been generous in terms of the contents of the packaging, but at least I liked how their boxes improved over the past 2 years.

Personally, packaging and build are pretty decent for the AS10; can be better, but not to complain about.

For starters, let me set the expectations straight. KZ kept its house sound with the AS10, v-shaped tonality that is, and while I did say that this is an improvement from ZS5 and ZS6, I didn’t mean that this can compete with $100 IEMs. What I meant was that this was definitely a departure from the experimental tonality of those IEMs, and that I personally feel those two to be, well, sub-standard in terms of tuning. While the AS10 remains to be v-shaped with quite plentiful bass, it still does sound a heck lot more natural than those two.

I think that the AS10 can definitely a lot better had it been given more R&D time given the number of BA drivers used for this thing. While each drivers per earpiece were clearly defined in the marketing images, I think KZ could have tuned it to focus more on the quality particularly the low frequencies rather than quantity which is pretty obvious in the bass it presents.

P.S. I find it weird that the AS10 is advertised to have 10 drivers where as the fact is, it is just really 5 per earpiece. I mean, yeah, it was indeed correct, but the usual convention in presenting the driver quantity is the number of driver PER side, not for both. Then again, I still am a staunch believer that the quantity of drivers is not directly proportional to the sound quality of an IEM.

Anyway, let’s go through the AS10 and see how it fares using my DAPs. Will also be trying it out using the Nocturnal Audio Acrux and see how much improvement the cable can offer.

It does sound fun listening to The Offspring using the AS10 and the Centrane HiFi-M8, what with the fast pace track jamming quite well it a packful of bass punch. I just felt though that the sub-bass is a bit thin to match the lush mid-bass from the AS10. I felt the mids a bit recessed, as expected, with the highs sounding a bit more conservative compared to the bass. I appreciateed it though considering that at least it didn’t sound like ZS5 in terms of treble quality/quantity.

I tried to humor myself and used the 2.5mm TRRS terminated plug, SPC wire, 2-pin cable from Nocturnal Audio called Acrux, of which I though to bring about quite a slight improvement from AS10’s tonality. As a result, mid-bass had an improved quality, sub-bass became more pronounced, mids improving slightly with the highs also becoming a little bit more prominent. The Acrux didn’t turn the AS10 into a $200 IEM contender, but it did some pleasing improvements.

With the stock cable, playing the track using the Astell & Kern AK100 paired with Centrance Glove A1 sounded a bit too dark for my taste. While the expectation is that the AS10 is a warm, bassy IEM, the synergy between the source and the AS10 made the track lack a bit of focus on the higher frequencies. The boom of the orchestra seems to manifest too much over the mids, which I think isn’t so good as I woud expect Ben Folds’voice to be the highlight of the track. I again switched the cable to Acrux and this time, the track sounded far better. I felt the vocal and the piano to be a lot more distinct, with the bass appearing to complement the vocals a lot more than how it sounded like using the stock cable.

Snow On The Sahara (Anggun, The Best Of)

This pairing (AS10 & Hifiman HM-901S) felt odd; while the vocals doesn’t seem to be too recessed (in fact, it sounded most forward as AS10 can offer based on the test I did with my DAPs), I find two things about the pairing: mid-bass sounded a lot more loose and plentiful together with the sub-bass, while the highs felt like it was struggling to compensate. I didn’t try it on for a very long time, so I did switch to the Acrux again and still, the only improvement I felt was a thicker mid-range, same quantity of bass (mid and sub) and a little more pronounced trebles. There was just a bit of hickup in the upper mids region, where it felt like there was a dip around 4-8khz range; just can’t put my finger on it. If you have the HM-901S, I really won’t recommend it. To all 3 sources that I paired with the AS10, this one has got to have the most seemingly unnatural sound for me.

Don’t get me wrong though; I still think the AS10 sounds better than the ZSA, what with the AS10’s richer frequencies and better imaging compared to the ZSA. If you own the ZSA, I still maintain my claim that the AS10 can still be considered as an upgrade to the ZSA.

While I still strongly feel that KZ took the right direction with the AS10, I think that they may still have a long way to go to actually reach the levels of the Shozy-AAW Hibiki or the Tin Audio T2. Tuning has indeed improved from how KZ did with the ZS5 or ZS6, but then again since they already have multiple drivers on their arsenal, I felt like they could have capitalized better with the fact.

As mentioned above, KZ could have used a better 2-pin jack which I think may loosen over time. I think it would have just been a very small cost to add; this should go a long way if they will do such.

With the SRP of the AS10, KZ could have added a bit of premium to the packaging if they decided to add a case or pouch to stow away the AS10 in your bag. I have seen some soft shell cases available in Aliexpress for less than a dollar; I think buying so in bulk would probably cost a lot less.

For its price (SRP $50-$60), I think the KZ AS10 should be a decent buy especially for those who has a limited budget, but with the same price, there’s a lot more that can be had for the said budget. If you are after better details off your IEM, there’s a plethora of options for the said price point, some of them offering an even better packaging or tuning. But I am keeping my eyes peeled on what KZ is going to offer next, hopefully something that can truly contend against other IEMs within the same price range.

***Again, thanks to our sponsor for the review unit for the KZ AS10. For those interested to get one, here’s the link for the product: https://bit.ly/2QSE1dS